'The cry of Phoenix is like sound of tungso. This creature didn't eat living insect and only eat bamboo fruit. Don't fly in disorder. This creature will not sit down without Paulownia coreana.'
From old times, Phoenix is regarded as a four numinous animal with Dragon, Kirin and Black turtle.
Imaginary creature, Phoenix appeared on folk painting, accessory and a pillow end of royal family. 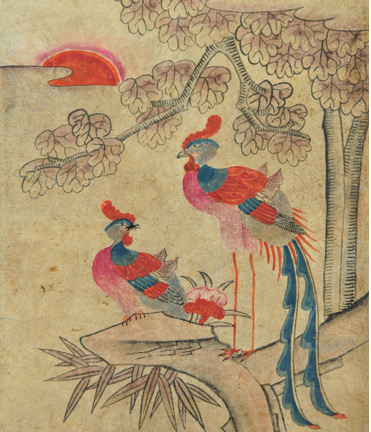 This creature appeared at the Later Han and was introduced in Korea with Buddhism.

China's book -  山海經  describes Phoenix like this : Phoenix is similar to chicken but Phoenix has five color feather, makes five marvelous sound and dance.
-  說文 descrebes Phoenix like this : The appearence of the front is wild goose, back is turtle, neck is a snake, tail is a fish, scales are dragon, chin is swallow.

Nowdays, you can see Phoenix in handle of the seal of state(Korea) and front gate of  Cheongwadae(the Korean presidential residence). 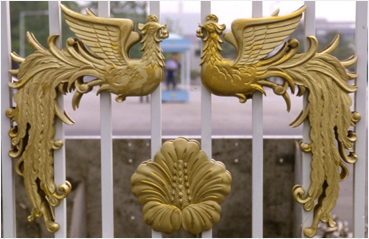