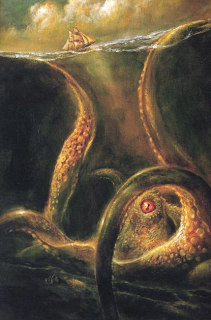 Kraken
Kraken is a very famous Monster. This monster appear in many kind of  book and movie.
For example, in Mobydick of Herman Melville, Giant squid fights with a sperm whale.
And in Pirates of the Caribbean, Kraken attacks a ship with scary power.
Kraken was the subject of fear. In fact, octopus was called as devil fish in northern Europe.
Actually, northern Europeans didn't eat the octopus or squid.
Kraken live in the northen ocean. Generally, Appearence of the Kraken is like a octopus or squid.
But an accurate appearence is not exist. In the legend of Judaism and Christianity, Kraken is two
monstrous fish which was born at the Creation and live as the end of the world. 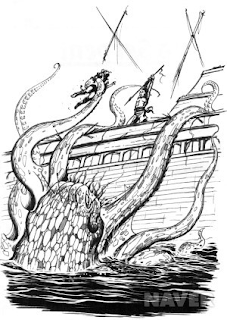 Here is a information for Kraken.
"Size of Kraken's back is 2.5km, So we cannot see the whole Kraken's body. If you see this monster,
you can get a feeling that many small island are gathered and flotages,small fishes surround the around. Kraken give out strong smell to attract many fishes, then eat the fishes.
Kraken not only eat but also excrete during a few month. By the way, Kraken's excreta had smell to
attract the fishes too.  Looks like as arms, several thing is thick as sail of Medium-sized shipping
and slippery. Kraken has a quiet nature. So, Kraken didn't attack people or ship vainly."

As well as, Here is a example of Kraken's character.
"A bishop discovers a Kraken which come up on the beach, but he think that the monster as a rock.
So, he said Mass on the rock. Kraken waited for the Mass politely. Then the end of Mass, Kraken disappeared to sea slowly."

Occasionally, this monster brings big fish. So Kraken was believed mild monster at sometimes.
But in  the East, Kraken was not mentioned. And Asian do not scary the octopus or squid.
Maybe, in my opinion, Kraken was not appeared in the East.