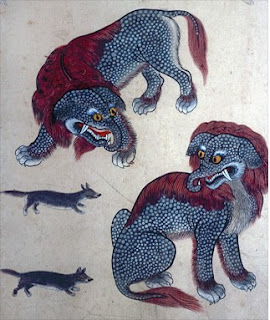 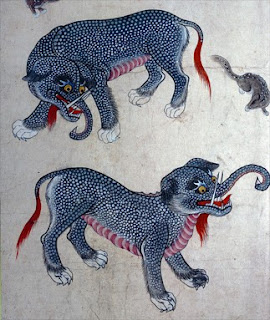 Bulgasari
Bulgasari is a fabled monster in Korea and China etc.
bulgasari eat iron, defeat nightmare and smallpox.
According to a Korean language dictionary,  'body is bear, nose is elephant, eye is rhino ,fur is needle, tail is cow, leg is tiger.' But, Bulgasari's appearance was recorded as a various appearance.
So, Bulgasari's look vary in different localities. And now, remaining the Bulgasari's stories are more than 20. For this reason, Bulgasari's pictures varies as artists. But the pictures have something in common. In summary, body is like bear, head and nose is like elephant.
According to a book of the Joseon Dynasty era, "Unknown monster was there. so, I made an attempt to kill the monster, but the monster ate many iron. so, I could not kill. Therefore, the monster was called as 'Can't killing  (不可殺  - Chinese pronunciation : Bul Ga Sal).' If throw this monster on fire,
the monster not dead and body is on fire from end to end. then invade private houses. so these houses are burned." 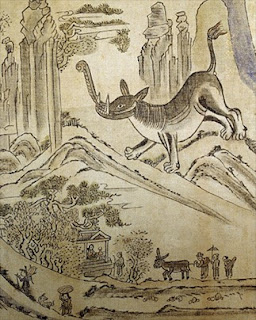 <<Bulgasri Story>>
In Goryeo (Korean Dynasty and the past than Joseon) era, there was Ki Jong-Lang of Buddhist monk. Accidentally, he received divination with 'You can take 100 sons.'from fortune-teller.  After that, to take 100 sons, he forms a connection with women who came to pray at Buddhist temple. So, he gained 99 sons. Then, he tries to rape a wife of minister. But he was caught and put on the wanted list. So, he visited a younger sister's house to ask help. But the younger sister want to accuse brother to get for a reward. Husband of the sister who knows this fact killed his wife because husband thought that  his wife betrayed moral laws. then Husband helps with his wife's brother.
In return, monk gives a monster which was made by rubbing rice paste. This monster looked like a small bug start eating small needles. then ate chopsticks,spoon,scissiors,hoe and etc. Eventually, this monter is getting bigger as more eating iron in Goryeo. Then, Goryeo tries to kill this monster but not died. So, this monster was called as 'Can't killing (不可殺 - Chinese pronunciation : Bul Ga Sal).'  Goryeo used last means that burn the monster.
However, Bulgasari was not died. With body that had burned,this monster wander on Goryeo's territory. As a result, all territory ran into danger with fire. Goryeo's King has declared that a men who kill this monster can received goverment position and treasure. So, He attached a amulet which was given from monk(Wife's brother) at the Bulgasari's body. Then, Bulgasari vomitted all iron and vanished. As a result, He received not only a goverment position but also treasure and lived happily.

Bulgasari has a heroic feature. This monster has appeared at caotic time and neutralized hierarchy.
In addition, transimission aspects of Bulgasri show a greed of immoral human. 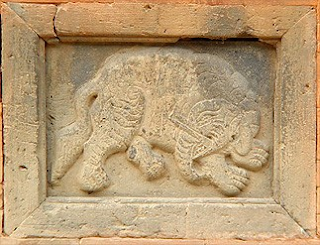 You can see Bulgasari's ectype if you visit Gyeonghoeru of KyungBok Palace. People believed that Bulgasari stone statue will protect fire. so people made this statue.